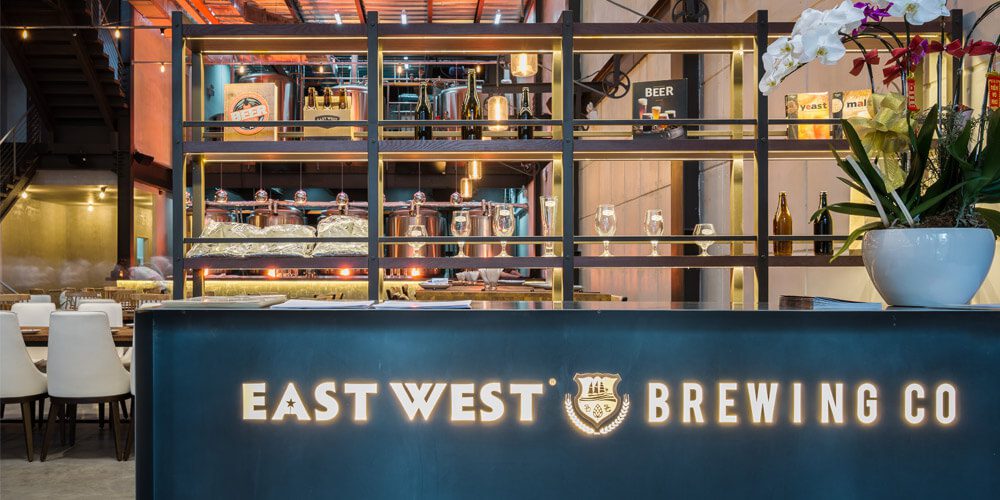 You are struck by the scale of the place as soon as you walk up the small staircase into East West. It’s a grand arena, and the lofty ceilings match its impressive ambition. The trick is to make the large space inviting without being intimidating, and East West have pulled it off.

Lovers of craft beer have recently been spoilt in Ho Chi Minh City, as a new wave of brewers hope to wean drinkers off mass-produced lagers towards a more diverse range of tastes and flavours. East West is a brewery first and foremost, and the tanks where the beer is made dominate the eye at the back of the building as soon as you walk in. This is intentional. They are proud of the beer they make here and want to show it off.

In terms of décor, they had a clear image of what they wanted to achieve with East West from the outset.

“We want to raise the bar in terms of design,” says general manager Loc. “We wanted to stay true to the factory style. We’ve left the ceiling untouched and we want to expose as much as the building as possible to get an industrial feel for the place.”

The place is beautifully lit, proving industrial doesn’t have to mean cold and unwelcoming. The wooden beams that adorn the walls give a flavour of what a brewery might have been like in the Europe of yesteryear.

The tap room of East West is the drinking bar, and Loc says they wanted to make it feel special.

“We wanted to design a very premium bar — not just a bar counter and here’s your drinks.” It complements the grandness of the main room nicely, and is a sociable space to meet friends for a drink after work.

You can’t expect to change a drinking culture overnight, so East West has started by introducing their foundation beers to their menu which are designed to introduce craft beer to this new marketplace. They have only been open since January, and the team has been pleased with the reaction from the local Vietnamese population.

“We can’t just come here, bulldoze in, and say — this is craft beer — drink it. We have to be responsible,” says head brewer Sean.

First up is the Far East I.P.A. It offers a local twist on the traditional favourite, and is smooth and soft on the palate with a hint of Asian fruity flavours. It serves its purpose of not being too extreme or hoppy to the craft beer newbie well and sells at VND85,000 for a 330ml glass, or VND110,000 for 500ml.

The 12% Independence Stout really impresses. Often the gut instinct when faced with a beer of that strength is the fear that it will overwhelm the taste buds with sheer alcohol content. I had visions of thick, impenetrable treacle, but this was refreshingly light for a beer that packs such a punch. Its flavours are subtle, but with enough hints of chocolate and coffee to remind you that you’re drinking a stout. It’s a big success and could yet become the signature of East West’s menu.

If you don’t know what to choose there is a tasting option, where for VND175,000 you are served four 160ml glasses of beers from the menu. The menu also contains other firm favourites such as the pale ale as well as blonde and dark Belgian beers, so it would be a fun way of gently dipping your toe into the world of craft ales for someone who is new to it.

The beauty of East West is that by having their own on-site brewery, they are able to adjust and tweak flavours until their customers are satisfied.

“Every beer is made on a personal level,” says Sean.

Here everything is in place to ensure that East West’s craft beer will become a great success, one beer at a time.